Luckys Gamble: A Television Pilot is Now Available for Purchase

A while back, I wrote a television pilot that I never released. Partially because I had plans on filming it myself and putting it out there. Well, fast forward a few years and I have a few irons in the fire, so here's Lucky's Gamble. I wrote this after watching a ton of Breaking Bad and always being a fan of heist films. Oceans 11 being the most famous and many others. This teleplay follows the actions of four friends who are gamblers in Oklahoma city but are struggling through the daily slings and arrows of life. They decided that the only way that they are going to get ahead is planning a heist on the Indian Gambling casinos that are in the city of Tulsa, Oklahoma.
This is a labor of love for me and it's also something that I've written that I'm very proud of. It's available for filming, purchase, stageplays. Anything that you would like to do with it. I would appreciate if you do a performance or something of it, throw me a bone. But then again, let me know you're current situation, and I'm willing to work with you. I know what it's like to struggle. Check it out here: 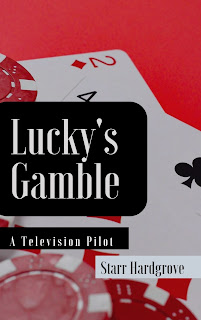