Inside Llewyn Davis and Why It's a Great Movie 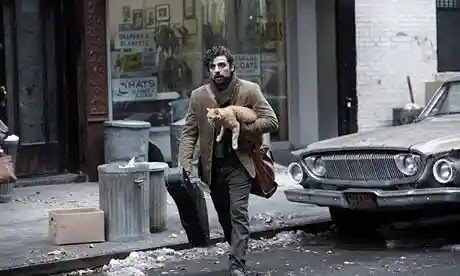 After watching Moon Knight, I thought it might be a good idea to revisit one of my favorite movies by Oscar Issac and some of my favorite filmmakers the Coen brothers. The movie is called Inside Llewyn Davis and it tells the story of a folk singer who is dealing with the death of his partner in a fairly successful duo, and trying to strike out on his own while maintaining his authenticity. His music was based on the music of David Van Ronk which was a contemporary of Bob Dylan, but he represents an everyman living in the world created in the Mayor of MacDougal Street.
Oscar Issac plays Llewyn Davis, a down on his luck folk singer who is clinging ot whatever success he had from his previous duo. His partner died which left him alone to continue on without him. He's searching for success but also trying to maintain his authenticity. In the meantime, he's sleeping on couches and dealing with personal issues. Llewyn had a girlfriend but he messed it up and she moved to another man. He gets an opportunity to play a session with the boyfriend.
The movie tells the story of an album through the life of the singer and his quest to take the right path to success without ever really knowing what that success is. His agent is not really promoting him very much. The agents in Chicago don't think that his music is very profitable. He's stuck between doing the work that he wants to do and making something commercial that people will buy. Something that I think we artists at one time or another all need to reckon with.
The movie tells the tragedy of the working mans singer. It tells the story of a catalog artist who is destined to be the mid range catalog artist.
Llewyn Davis masterfully shows what the struggling artist goes through. It's the journey of a struggling artist who is constantly making the wrong decision. Llewyn's self-sabotaging journey through his post-duo career shows his despair and his inability to compromise and create a new start for himself.
Watching Inside Llewyn Davis again at this stage in my life is a completely different matter. I'm at a point where my career is not really going anywhere as an actor. I still have the skills and the knowledge, but I'm not putting in the time or the energy in the art of it. I'm lacking focus, but then am I missing opportunity. Recently, the Tulsa King is filming in the area and I was thinking about what it would be to be in that or at least be an extra in the background. Used to have film guys asking me to be in their films all the time. Not so much anymore. Don't really know whether or not I will be doing it anymore. I go back and forth a lot of what is next. We'll see.